By Ingé Lamprecht on Money Web

Black ownership in banks dropped from 34.8% to 30.5% between 2016 and 2017, but still exceeded the target of 25% in terms of the Financial Sector Code (FSC). Black economic interest also fell as several empowerment deals matured and black investors exited their investments.

These are some of the findings of the 2019 Transformation in Banking report, which was commissioned by the Banking Association of South Africa (Basa) and compiled by Intellidex. 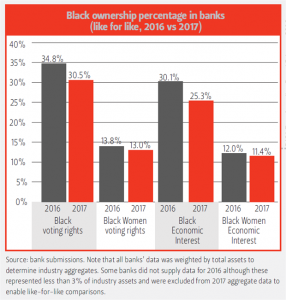 The research firm estimates that banking sector black empowerment deals had generated R57 billion in net value for the beneficiaries of bank empowerment schemes by the end of 2015.

“So this sort of rhetoric that goes around that there has been no value creation for black investors is quite honestly just not true,” says Cas Coovadia, managing director of Basa.

The release of the report comes amid sporadic calls in some political circles for banks to be nationalised, criticism that the sector has been slow to transform, and in light of the ongoing review of the transformation targets set out in the FSC. While the report highlights some of the sector’s successes with regards to transformation, it also notes areas of concern.

Lending up except for SMEs

According to the report lending for black economic empowerment (BEE) transactions increased by 13.6%, for affordable housing 26% and for black agriculture 20.6% between 2016 and 2017. Lending to small and medium enterprises fell 7.7%, amid economic pressure.

At the end of 2017, total industry lending stood at R3.35 trillion, implying that targeted loans were 7.3% of the total loan book.

Coovadia says the debate and rhetoric around expropriation without compensation will continue, but banks haven’t taken a view that they must cut back on their lending and are probably of the view that a pragmatic solution will be found. 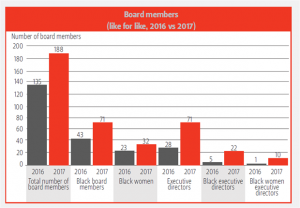 Coovadia says while the increase is far from desired, there are a couple of industry-specific issues that must be considered, for example that the South African Reserve Bank (Sarb) has to be satisfied with the directors appointed to banking boards. Due to the role banks play in society directors must understand banking-related risk and other issues.

Stakeholders have put their heads together to create a training course for non-executive directors in the banking industry that is now offered by the Gordon Institute of Business Science (Gibs). The Sarb encourages banks to send people to the course as a precursor to being appointed as non-executive directors. The industry is hoping this will help facilitate an increase in the number of black directors, he adds.

According to the report, banks spent R71 billion on the procurement of goods from local and international suppliers in 2017. Roughly R20 billion of this was spent at black-owned companies and around R14 billion at businesses that are at least 30% controlled by black women.

“We accept that there will always be a demand to do more and we need to be fairly robust in what we say yes to and what we say no to, but we try to do what we can.”

The Black Business Council on Monday said it would meet with Basa and other stakeholders over the alleged discrimination of black clients by FNB and other banks.