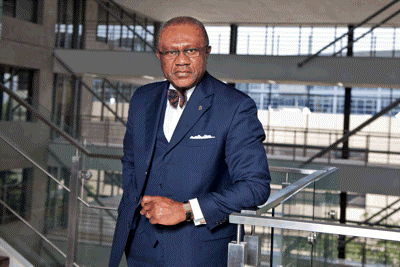 Bow-tie clad Ebenezer Essoka has nuance, detailed knowledge of the continent whose banking system he has helped to transform for almost three decades. Apart from being the Chief Executive of Standard Chartered Bank South Africa, ‘I’ve been at the centre of commercial activities in Africa for a very long time, [having] started businesses, closed businesses, restructured businesses that were in a terminal state of decline, and repositioned many companies for sustainable growth,’ says the confident, proudly immodest Essoka, who, before joining Standard Chartered South Africa, held executive positions in eight of the bank’s African operations through time. He wants to be remembered as one of the “African financial engineers” who will construct a metaphorical super highway to link and consolidate the economic strength and potential of Africa’s 54 countries and one billion people.

Essoka has brought this pan-Africanist stance to Standard Chartered South Africa and is emphatic that South African companies can use the bank’s extensive networks, connections and knowledge to successfully expand into Africa. But first, the rest of Africa needs to see the worth of a South African presence. ‘It is part of my job to promote South Africa as a reliable and trustworthy partner to the rest of Africa,’ he says. ‘In working with diverse business leaders and governments across the region, I have noticed there is a distinct gap in the continent’s understanding of the role South African business plays, and the potential role it can play in supporting and contributing to the continent’s collective prosperity.’

Essoka, or “Ebby”, as he is known to his colleagues, adds that South Africa is certainly taking steps to improve its competitive position and maintains that it is important to acknowledge this country’s progress. Citing two industry surveys – The World Bank’s Doing Business Report and the World Economic Forum’s Global Competitiveness Report, he notes that there is significant improvement in the ease of trading across borders through the South African-led campaign to improve African customs processes.

‘South Africa has reduced the time, cost and administration required for international trade. It remains the most competitive market in sub-Saharan Africa. Markedly, South Africa is fortunate to have a sound financial services sector, which meets global standards, with a robust and transparent regulatory framework.’ On doing business in Africa and the benefits for South African business, Essoka explains that Africa shows greater resilience to global influences, notably the concerns around the economic outlook of more mature economies. ‘It’s still very much Africa’s time.

Much of the growth on the continent remains domestic in nature, and with the progress the continent is making in improving the regulatory environment, infrastructure and fiscal stability, intra-African commercial activities are bound to increase. This will further fuel trade and investment opportunities with the rest of the globe.’

Cameroonian Essoka doesn’t believe that South African business has enough awareness that some of the world’s fastest growing economies are found in Africa. Sierra Leone, for instance, grew 30% in 2012 resulting from increased iron-ore production. He says that in 2011 Ghana grew over 14% with the discovery of oil. East Africa has also managed to grow rapidly, despite the global economic crisis, and is now set to be the world’s new energy hotspot, he maintains. ‘Standard Chartered is supporting the development of these key regions in Africa. For example, we were the official advisors on the sale of Cove Energy, an AIM-listed company with gas assets in Tanzania. Many industry watchers have referred to this as the largest upstream oil and gas deal in Africa this year.

South African companies looking to expand (which Essoka sees as an imperative for economic growth) should heed the fact that there is potential in Africa that is not easily replicable elsewhere. These include: the wealth of natural resources, dormant economic potential, the entrepreneurial zeal of the small-medium-sized enterprises, and gaps in infrastructure development, from real estate, to roads, bridges, airports and seaports. He is however aware of the problems of public sector red tape and political instability in Africa, which may slow down the pace at which potential and development can be unlocked. Essoka also notes that the banking industry will ‘naturally do more’ with key sectors like metals, mining and agriculture.
ASIA AND THE MIDDLE EAST
‘Of course if South African companies must expand, Asia and the Middle East are also crucial locations for growth,’ says Essoka. He urges that South African companies use this country’s membership of the BRICS community as a valuable platform to identify opportunities in Asia. ‘A critical success factor in expanding or investing in other regions is to find the financial partner who can assist them in carving a successful path of expansion, introduce them to a valuable on-the ground network and help steer them through the various regulatory hurdles. Standard Chartered is that ideal partner,’ he asserts. Asia and the Middle East also host the world’s fastest growing economies, and ‘South African companies should make every effort to participate in the trade corridors between these regions. It is not an option, but an imperative, as these corridors will spur valuable growth going forward, states Essoka. Invicta Holdings and Mediclinic are examples of South African companies that have positively positioned themselves in these regions.

Standard Chartered was the industrial firm Invicta’s exclusive financial advisor in the recent acquisition of Kian Ann Engineering in Singapore – this acquisition looks set to boost Invicta’s revenues by an impressive 20%. Standard Chartered also supported Mediclinic’s completion of their acquisition of the UAE’s Emirates Health. ‘It is examples like these that support the transformation of South Africa’s economy – improving the country’s competitive edge and positioning South Africa as a global player,’ notes Essoka.

According to Essoka, we are spoilt for statistics when highlighting the benefits of operating in the Asian and Middle Eastern trade corridors. ‘Take Africa and China, for example: trade between these two regions has grown 15-fold in the past decade to reach $166 billion in 2011, and is expected to increase a further three-fold over the next 10 years. China’s trade with Africa has not slowed as much as its trade volumes with other regions – year-on-year China still continues to increase its trading with Africa.’

Essoka believes that a shift in “economic gravity” from West to East is of great importance to South Africa, and the country must be well-positioned to take advantage of this emerging global dynamic.