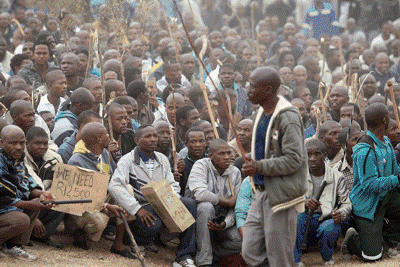 As contentious as it may be to make the argument that unsecured lending contributed to the unrest in the mine village of Marikana in the North West province, there are some lessons that can be drawn from the incident by all stakeholders involved in unsecured lending.

Following the death of miners at Lonmin’s Marikana mine, some politicians and certain sections of the media implied that mine workers demanded excessive wage increases partly because of over-indebtedness and microlenders who doled out unsecured loans largely to low-income earners. Bankers dismissed this as too simplistic a point to make about a mining village that battled political and socio-economic challenges, including a migrant labour system that continues to put pressure on workers’ finances.

‘Marikana is an emotional issue. The strikes are now in the Western Cape as well. If the media or the politicians want to use unsecured lending and over-indebtedness as an excuse for other fundamental issues then it’s late in the day,’ says Capitec’s CEO Riaan Stassen.

Tami Sokutu, an Executive Director at African Bank Investments Limited, the largest unsecured lender in the country, adds: ‘To connect the incident as a real correlation to unsecured lending is too simplistic for such a complex issue. A point to bear in mind is that the customer initiates the borrowing and therefore it is not appropriate to place the full responsibility on the lenders.

‘What is also worth mentioning is that our model is premised on the fact that the provision of credit to customers is underpinned by the assumption that the customer will have the ability to repay the instalments (affordability calculation must be right) and that he will be employed into the future, hence it is in our best interest that the customer does not overextend himself,’ he says.

Sokutu added that when African Bank extended credit the company analysed if the customers had the ability to service the instalments. A glimpse into the National Credit Regulators (NCR) statistics weakens the argument that the growth in unsecured loans is largely driven by lending to the low-income segment.

Over the last three years there has been an increase of close to 2 million credit-active customers in South Africa. These clients in the country are now over 19 million as compared to over 17 million in 2009. NCR statistics show that workers earning over R15 000 are the key drivers of the growth in unsecured loans. Unsecured credit granted in the second quarter ended June was R25.8 billion, compared to R21.9 billion in March 2012. About 37% (R9.5 billion), the largest portion of this R25.8 billion, was granted to people who earn over R15 000. This compares to the R2.3 billion granted to those earning up to R3 500, about R2.1 billion given to people whose income is between R3 501-R5 500 and R3.2 billion of unsecured credit granted to people who earn between R 5 501 and R7 500

The statistics show that unsecured credit constituted about 9% of the total outstanding debt, which is currently sitting at R1.3 trillion, undermining any talk of a threat to South Africa’s financial system. Despite the fact that the bulk of the unsecured credit in the country was granted to people earning over R15 000, there are lessons to be learned from the Marikana incident. Regulators need to look beyond the big credit providers and pay more attention to the smaller entities known as mashonisas.

The National Credit Regulator’s investigations in Marikana revealed some rogue elements among certain credit providers who over-priced loans above the interest cap of 31%, and retained bank cards, personal identity numbers and identity documents in contravention of the National Credit Act.

Capitec’s Stassen says the Marikana situation showed that more capacity is needed to enforce the National Credit Act. ‘Had the situation been policed, you wouldn’t have had a number of guys out of line,’ he maintains. Sokutu concurs with this view, adding that ‘timeous and rigorous enforcement of the act would assist to curb abuse of lending by those lenders who deliberately break the law by using unlawful methodologies of lending and collecting money from customers’.

‘There is enforcement,’ argues Advocate Zweli Zakwe, the acting manager of Investigations and Prosecution at the NCR. ‘We have conducted 733 investigations since the inception of the NCR and have also referred a number of matters to the Tribunal during this time. A total of 57 compliance notices have also been issued. During the past financial year a total of over R32.5 million has been refunded to consumers due to enforcement action,’ he says. But even with enforcement, Advocate Zakwe believes, there will be those credit providers who contravene the law.

Although the NCR could do with more enforcers to police illegal credit activities across the country, perhaps stiffer sentences could be useful in order to discourage providers from contravening the law.

However, Stassen argues that a review of the National Credit Act should caution against making it harder for the big lenders to do business, thus giving an opportunity to rogue forces. ‘It is also important to find a way to educate customers so that they understand the dynamics, cost and risk and benefits of credit and its sustainable use,’ he mphasises. Sokutu maintains that unsecured lending fulfills a real need. ‘For instance, from research that we conduct, we find that many of our customers use their loans to improve their housing situation and for education. This is heartening, as our purpose is to impact peoples’ lives positively through responsible credit,’ he says.

‘What is also evident is that in the unfortunate situation in Marikana many miners take on a lot of credit, resulting in very high levels of debt repayments from their wages. Unfortunately this situation is not only in the mining sector in South Africa. It is across all sectors in the economy. It is also not unique to low-income earners. Even high-income earners are generally highly leveraged, as inflation and a deteriorating macro-economic environment affects everyone. Obviously the impact is more severe on the lower-income earners.’

Sokutu says that credit providers need to put customers at the centre of their lending practices to ensure that customers can afford to repay their loans within the contractual term. ‘We are sensitised to the economic conditions of our customers, and where our customers face hardship, such as some of our mining customers, we assist to restructure loans to help them through their financial hardships,’ he adds.

The engagements between The Banking Association of South Africa (The Banking Association) and National Treasury are a good sign that the industry is interested in eliminating unsavoury elements in unsecured lending. The Banking Association Managing Director Cas Coovadia has previously stated that banks are working on a draft Code of Good Practice on Unsecured Lending. Coovadia says this would put a stop to certain providers offering unsecured loans for the sake of getting more profit from the interest, rather than a cheaper loan relevant for what needs to be financed.

Agreements between The Banking Association and National Treasury have also called for the review of loan affordability assessments, relief measures for distressed borrowers, limiting garnishee orders and reviewing the use of debit orders.

The Banking Association, the NCR and National Treasury have agreed to devise a standard to measure affordability. This standard of affordability could possibly be incorporated into regulations aimed at dealing with over-indebtedness.

One of the lessons to come out of the Marikana incident is the widespread abuse of garnishee orders by certain credit providers. Some employers of indebted workers were allegedly asked by some lenders to pay part of the employees’ debt over to the lender with interest. To deal with this abuse, The Banking Association members have agreed not to use garnishee orders against credit defaulters. To enforce this commitment, National Treasury is expected to engage and suggest to the Department of Justice that garnishee orders be limited to maintenance orders.

There are also moves by member banks to start up a consumer education fund that would educate the public about borrowing and other financial matters. The issue of consumer education could go a long way in protecting borrowers from rogue credit providers such as those who retained bank cards in Marikana and other areas in the country.